Chess is a game that does not rely on chance. It is not dependent on the deal of cards or the throw of dice or indeed any factor outside of the players control. Furthermore it does not require any significant physical skill, which allows both sexes, all ages and handicapped players to participate on equal terms.

The game was devised in its recognisable form in India c 600 AD and is based loosely on ancient wargame tactics and strategy, with all moves being "above board".

The game has since been refined, internationally standardised and extensively analysed by man and machine, but has not been analysed "out", for although the number of possible games is finite, there are more of them than atoms in the known universe.

Chess is both exercise and stimulation for the brain, which has been proved to be beneficial in maintaining good memory and concentration for longer into old age.

Swindon Chess Club has the most members on roll of any Chess Club in North Wiltshire. We play graded and friendly games throughout the year at arguably the best venue with extensive new equipment. We are a friendly crowd of mixed abilities and the charges are very reasonable. Please contact us for details.

We are also affiliated to the WCCA - Wiltshire County Chess Association. 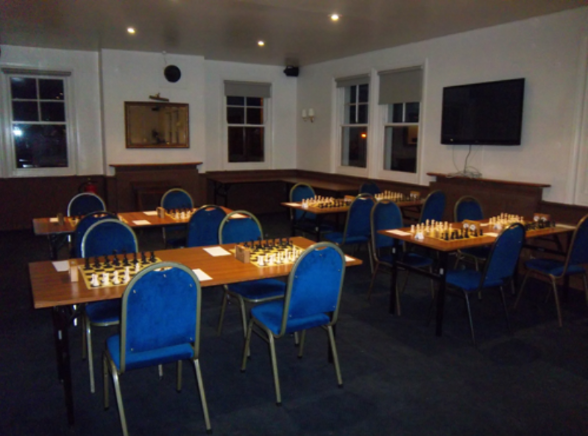 The Club meets every Wednesday evening ( except Xmas ) with League matches played on a Thursday.

Facilities exist for casual games to be played on Wednesdays.

Note that fixture dates may be altered at short notice particularly due to inclement weather.
Casual players are advised to phone beforehand for details.

Maps for League away matches may be obtained by clicking the following links:

We are unable to accept juniors at our Merlin venue (with some exceptions from time to time, but when accepted, they must be accompanied by a responsible adult.)

However we are pleased to be associated with the South Marston Junior Chess Club, South Marston Village Hall, Old Vicarage Lane, South Marston SN 3 4SH with whom junior beginners should apply in the first instance.  Club times are : Thursday 6.00 - 8.00pm.

The Club Championship is an all-play-all competition such that each player has a different opponent  every week, selected by a card system.

The card system also attempts to equalize the black/white selection.

The games are played at the League rate and, with some exceptions, are ECF graded.

In the event of an odd number of players, then one player is asked to stand down, but this is not allowed to happen more than once, for any given player.

The winner is the player with the most points irrespective of the number of games played.

Current results, together with comments, may be found on our Facebook page.

The past winners are as follows: